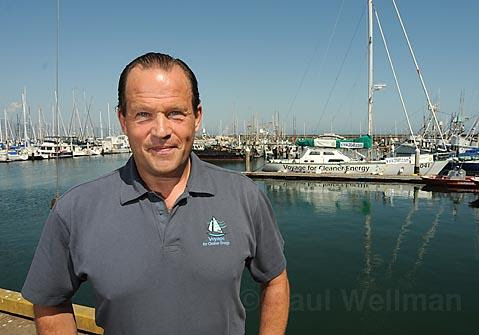 Ebenezar: Thank you so much for having this stroll with me Mr. Robert.

Robert: the pleasure is mine.

Ebenezar: You completed your walk to the North and South Pole back in 1989, and I'm sure back then, there wasn't wide spread knowledge about Polar exploration and climate change, so what inspired you to go on this expedition?

Robert: I was inspired to go on these expeditions because of the history of the real polar explorers Shackleton, Scott, & Amundson. I also was very inspired by the idea that being a polar explorer went down well with girls at parties (laughs).

Robert: (haha) Yeah, and It was in course of these expeditions, when I walked under a hole in the ozone layer and witnessed melting ice, that I realized sustainability was not someone else's responsibility.

Ebenezar: Okay, since 1989 have you visited both poles again? If Yes, did you notice any difference in their conditions compared to when you first visited? Perhaps visible effects of global warming?

Robert: Yes I have noticed disturbing evidence that climate change is a reality in both the Arctic and the Antarctic. The effects however are more noticeable in places such as the Andes, Himalayas and Greenland where I have witnessed dramatic decreases in glaciers and communities in water crisis.
Ebenezar: Talking about Global warming, in 1989 you were mandated by global leaders to go on a 10 year global environment campaign to sensitize the world about renewable energy, global warming, and the likes. Yes?

Robert: Correct. At the first world summit in Rio I was issued this challenge and I have responded with active campaigns, projects, missions & expeditions that focus on sensitizing these issues. I have been particularly attentive on inspiring & engaging young people as they are the key to the future of our planet. No one is inspired by the negative- all these missions are centered on positive inspiration.

Ebenezar: But do you think there's enough awareness on global warming in the world today? Despite the obvious symptoms, a couple of people still think it's just some science fiction conspiracy. What do you think?

Robert: I reported in Johannesburg 2002, and in Rio +20. Part of the confusion on global warming is that it is not GLOBAL WARMING. it is climate change because, the world is not just warming up, it is also getting windier, colder, dryer and wetter. I feel that most, if not all, people understand the reality of climate change but the “So what factor” comes into play. Most people are too busy with work, family and they day-to-day life to be concerned with problems that are not within their immediate circle of attention. So we need inspiring messages that stimulate people to make active sustainable change.

Ebenezar: The theme for World Environment day this year is, 'SIDS'--Small Island developing States--to consider how small islands are vulnerable to climate change. What do you think can be done about these islands?

Robert: Recently I took a young leader from Maldives to Antarctica and the situation of his country and community was terrible, I believe the islands need to send a strong message to the world about the realities that they are facing. I believe that they need to have long-term action plans and possible prevention technology infrastructure implemented in case sea levels continue to rise. My heart is with all the communities facing these battles.

Ebenezar: 2041 is the company you founded and you're dedicated to furthering your environmental activism and inspiring action around the world. But what exactly is the inspiration behind that name 2041? Feels like some deadline or something...

Robert: It is the date when the international Antarctica treaty comes up for review, it is not inspirational but rather a reminder of the protective veil that could be lifted off Antarctica if we don’t take action now. Incidentally, I am not an environment activist.

Ebenezar: (haha) you're not? Wow, but you're the first man to walk to the north pole and south pole, you're a world class motivational speaker, OBE, UN Goodwill ambassador for youth, just to name a few. I mean, these are totally awesome achievements and I'm just curious, do you still have dreams you've not yet fulfilled?

Robert: I am returning to the South Pole in December 2015 to pioneer the use of the Renewable energy on a 50 day polar Expedition. I have dreams of a healthy planet were consumerism is not the prime element of our society.

Robert: It is the last chance to save one place on earth. No one owns it- it should be possible.

Ebenezar: In recent time we've had many more researchers visiting that cold continent for studies and research. Do you think Antarctica will become habitable anytime soon?

Robert: Antarctica is a natural reserve and a land for science and peace therefore except scientists no one should live in Antarctica- not ever.

Ebenezar: Thank you so much for talking with me Mr Robert, I wish you success on your expeditions.

Have you ever wondered why God made Antarctica? Huh? God wouldn't just put a large mass of ice at the corner of earth for no reason, or by mistake? Perhaps it was created to see how much we can tend and care for the earth. Maybe even to help regulate the earth's temperature or something, I don't know... But whatever the reason is, I know it is not to be cracked, drilled, and destroyed like we've already done to most of the earth.

I believe the next generation will do the right thing by fulfilling Mr Robert's and 2041's vision of protecting earths last wilderness. Do something to save the environment today. Happy Environment day.

Till my next stroll on June 8th, World Oceans Day; when I'll be strolling with another record holding polar explorer, Lee Swan( The first African Woman to make it to the North Pole); be good, be green. Jesus Loves you


RELATED STROLLS
•A Stroll with Nnimmo Bassey (For World Day to combat Desertification and Drought)
•A Stroll with Mike Perham (For Day of the Seafarer)
Posted by Unknown at 6/05/2014 12:00:00 am