‪#‎UN70‬: My Stroll with Margareta Wahlstrom, Special Representative of the Secretary General on Disaster Risk Reduction.

“Risk Reduction is not a stand-alone issue… you cannot achieve sustainable development if you don’t recognize and manage risk.” – SRSG Margareta Wahlstrom. 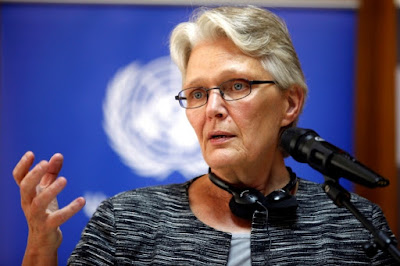 Ms Wahlstrom and I discussed this week's UNGA (the United Nations General Assembly) and the work of the United Nations since its inception 70 years ago; the Sendai Framework for Disaster Risk Reduction and its relation to the SDGs, and the Refugee crisis in Europe and North America.

It's Monday, 21st September 2015. Ms Margareta joins me from Geneva at 7:25am Nigerian time. I hope you enjoy our conversation.

You can either choose to read this summarized transcript, or download the full interview on my podcast Channel.

SRSG Margareta: 70 years is a long time, and of course one of the things that the UN is known for, which I think is the most important thing, is the peace project. The work of the UN is to work in such a way so that we can preserve peace. The UN is not the system that you see in New York; the UN is all the member states put together.

The second significant thing that has happened in these 70 years is the universal membership; one world for each nation. And the membership comprises of almost every nation in the world, and the few who are not members are at least observers. The UN is the only place in the world where countries come together and they all have a voice to speak.

Thirdly, the UN focuses on supporting the least developed countries and invests in development. I think it’s a very critical issue and the UN is the biggest advocate for development—not the biggest source of funding because, funding comes from many different areas. But it’s an important benchmark sector which of course links to what goes on later this week. The agreement on Sustainable Development Goals, which very importantly universal, means that every country will have something to achieve in terms of achieving sustainability and stability.

The final thing that I think is important is of course, my own agenda on disaster risk reduction which is something that has developed over the past thirty years. And I consider it as recognition that there’s so much we can and must do to reduce disaster risk, and that is part of the sustainable development goals. 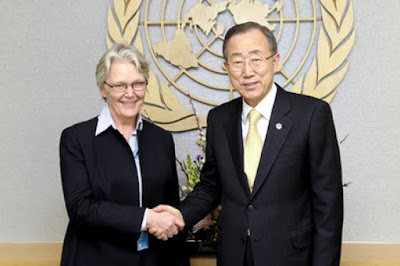 Major Milestones of UNISDR in the past 7 years

SRSG Margareta: As you know, our main office is in Geneva but 50% of our staff operates in regional offices where their main focus is collaboration with countries, and very importantly with local governments.

We’re a small office, but we have very large and far-reaching partnerships. In the last 5 or 6 years in particular, some of the achievements of the office include; a very rapidly expanding and broadening of partnerships—and this includes everything from communities, organizations, and of course local governments. Also the private sector and business, and many social organizations, disability organizations, youth organizations, and we make understand that this is their agenda and they have to be part of it.

We have an architecture of national platforms, regional meetings every two years which is completely multi-stakeholder (everyone is welcome), and every two years a global meeting that now attracts thousands of people.

Our main achievement is that we helped to facilitate the creation of the Sendai Framework for Disaster Risk Reduction which was achieved in March this year, and this is the new framework that will guide the world globally and locally for the next 15 years. We also have initiatives for development of local governments, safe schools and safe education, and many of these types of initiatives are going on really well—so those are some of the things we do.

Sendai Framework on Disaster Risk Reduction and the SDGs

SRSG Margareta: It’s a very strong relationship, you know what we are always emphasizing is the fact that, risk reduction is not a stand-alone issue. One of the things we made clear during the RIO +20 Conference few years ago is that you cannot achieve sustainable development if you don’t recognize and manage risk. 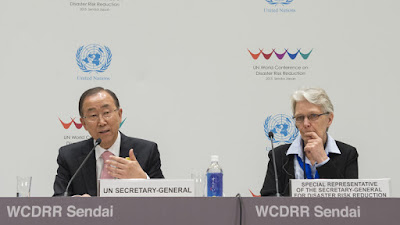 Refugee Migration in Europe, the Middle East, and North America

SRSG Margareta: This is of course a major catastrophe for the many people who are on the move. As we both know, the reason why they’re moving may be primarily conflict in their home countries and deteriorating conditions in many refugee camps because they are so many, but many of them are also moving because of very difficult economic conditions in their home countries.

Some of the migration can be handled by improving living conditions in home countries of the refugees. People leave for a reason, in fact most people want to stay back at home they have to reason to migrate, but if they are driven by economic or social reasons, then I think everyone needs to pay more attention to that.

We know so much about migration because we’ve done some studies on this, but most people move first locally; from a local area to a small town, then they move to a big town, before moving to a neighbouring country. It’s only when they have considered all these options that they take the dangerous journey to Europe or North America. I think there’s good knowledge about the complexities of migration, and of course how refugees move but in the main time we have a big major crisis here, and I can only hope, and encourage, that political leaders will very soon reach a clear agreement so that the hesitation gaps that we now have will be covered, and the reception will be done differently ad better.